We all know that men and women are wired differently (I think). The internet is full or articles that are bent on shedding some light on this complex, outer-space being called Human Man and Human Woman. Books, videos, TV shows, magazine articles, bloggers, have put in a word or two themselves. What is he/she thinking of? What does a guy mean when he says this? What did she mean by that?

This difference can cause confusion and misunderstanding, often resulting in a great deal of awkwardness in the friendship. In the area of relationships—whether friendship or romantic ones, these differences can make or break the relationship.

It is often known that guys tend to be more direct, seeking find solutions for problems they encounter. When a person opens up to them about a problem or an issue, they will find a way to come up with a solution. This does not always sit well with girls who open up just because they want someone to hear them out. Girls also tend to beat around the bush a great deal and add more color to what is often seen. They often interpret what they see and hear to be something bigger than it actually is. This might sound amusing, but it is actually true, and very, very confusing.

When a guy pays a girl some attention–such as inviting out for some movie time or asking her if she would like get a Coke Float from McDo with him, she might see it as friendship, but chances are, her imagination will start spinning off in other directions: “He must be asking me these questions because he’s interested in me! Did he just compliment the sofa from the furniture store we passed by? Is that his way of asking how I’d like my home to be furnished some day? Is he asking my opinion? Is that a sign that he would like to take our relationship to a deeper level?”

Sorry to burst your bubble, girl. In reality, he was just thirsty.

Guys, on the other hand, are more direct and assume less. When they say something, they usually mean exactly what they say, and when they usually hear something, they interpret it as to how they hear it. As a result, when a girl sends him a cryptic message, he tends to interpret it literally and then get confused when she gets all the madder. That’s probably why frustrated little boys get so confused about sisters and girl friends.That’s why guys are so puzzled when a girl says she’s find and then marches off in a huff. (What you guys need is a Manslater) Guys also say directly what they need or want or what they are thinking.

Girls, on the other hand, spend hours and hours thinking, analyzing, and interpreting everything a guy did: how he talked, what he said, how he looked while talking, why he cleared his throat, why he was wearing the particular shirt color he was wearing, the list goes on and on. You’d be surprised with the list a girl can come up with to help her interpret what a guy means. That she can come to the conclusion that you like her based on your comment over how awful the food in the restaurant tasted, or how the puppy that crossed the street looked (okay, maybe I’m exaggerating). Guys on the other hand, don’t do that. They hear something, they accept it for what it is, and don’t spend hours mulling over it, trying to decipher what a girl could possibly have meant. 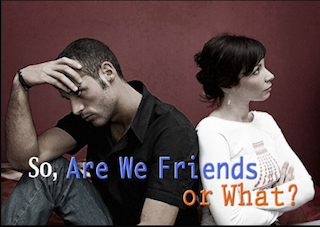 Thus, as in a previous article, when we saw how a girl made the assumption that a guy liked her, it was based on how she interpreted his actions and words. The guy, on the other hand, was oblivious to how she was receiving his attentions and thus ended up hurting her instead, though unintentionally. Situations like there are not uncommon. And, as we can see, they are a result of just how different from each other guys and girls are.

Such differences with how girls and guys think and how they analyze and interpret signals can become quite puzzling, and can result in a lot of confusion. These differences, however, do not mean one is wrong and the other is right. This does not mean that we should no longer talk to the opposite gender. These differences, confusing as they may be, were created by God. He intended men to be unique from women, and to have the uniqueness of both complement the other.

Neither does this marked difference mean we should throw caution to the wind and act as freely as we want to, letting our emotions lead us. Understanding these differences, especially in that of the opposite gender will help us as we relate to them so that we do not find ourselves in awkward situations where we are either assuming too much or not being sensitive enough.

How can we help, then? How can we build a healthy community with godly relationships? First, for the girls, we need to stop assuming. We need to stop taking everything personally–what a guy says to us, what he does, how he says it. We need to stop reading into more than what is actually being said. Second, for the guys, we beseech you to be more sensitive. Now that you know how the girls think and interpret what you say and do, you need to make sure your actions match your words (and your words your actions) so that there is no room left for false assumptions.

No one is to blame in all these differences. Like it was stated earlier, God made us uniquely—fearfully and wonderfully too. And He saw that it was “good.”

But if we remember how the opposite gender sees and interprets things, and how we should treat one another with love and grace, we’ll leave less room for mistakes, false assumptions, and broken friendships, and in its place, create the Christ-centered community.

Post by Alyssa Chua, TLW Volunteer. Alyssa is a Sojourner and Explorer. When she is not chasing stardust in distant lands, she is curled up in a quiet corner, reading a book or attempting to write one, Root beer and coffee are bare necessities. To read more of her ramblings, visit http://peraldaiel.blogspot.com.